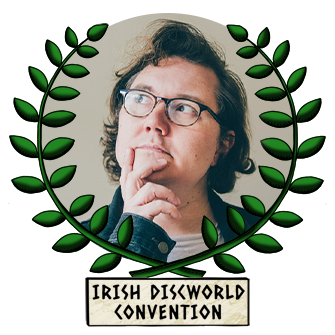 Marc Burrows is a Stand Up Comedian, musician, journalist and floppy-haired nerd based in London.
In 2020 he published The Magic of Terry Pratchett via Pen & Sword books, the first ever full documentary of the great man. People seemed to like it. He writes regularly about music, culture and mental health for the Observer, Guardian, Quietus and others, plays bass in the cult Victorian-themed Punk band The Men That Will Not Be Blamed For Nothing, and dabbles in stand-up comedy, having taken several one-man shows to the Edinburgh Fringe. In what little time he has spare he somehow holds down a full time job at Twitter. Marc's next book, about the relationship between Marc Bolan and David Bowie, will be published in 2022. He has a wife who deserves your sympathy, and a little black cat who probably doesn't.
About The Magic of Terry Pratchett:
The Magic of Terry Pratchett is the first ever full biography of Sir Terry Pratchett, and is the result of intensive archival research and new interviews with friends and colleagues of the great man, going back to the 1960s and 70s. It is available now through Pen & Sword books.  "An impressively comprehensive, engagingly written biography" ★★★★ - SFX, "The Magic Of Terry Pratchett makes a solid addition to the bulging Discworld bookshelves" - LitReactor, "His voice in these 'interesting times' is sorely missed. And in his absence, The Magic Of Terry Pratchett is a worthy substitute." -The Critic